ALLERGIC PETS CAN BE CURED WITH THE RIGHT DIET 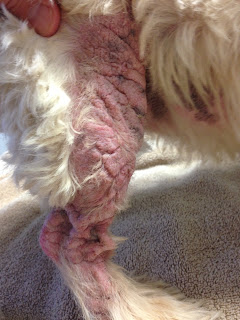 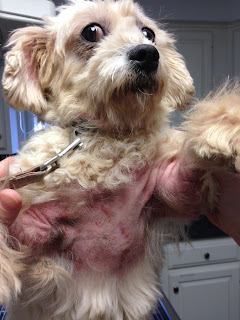 Meet Myra. Myra is a Cavalier King Charles Spaniel/Bichon Frise mix. She is 6 years old. She was released into rescue by her owners in January, 2015, because she had chronic allergies and skin infections. She also urinated on the carpet a lot. She was unhappy, constantly licking and chewing her skin, and spent most of her time hiding in her crate. She had been fed Purina Dog Chow her entire life.
When Myra came into rescue, we discovered she had severe allergies, along with oxalate bladder stones. She had surgery to remove the stones. We started feeding a commercial, frozen raw rabbit diet. We added probiotics to her food to help strengthen her immune system and she had weekly Thera-Clean baths (uses water, no soap). She was also given a short course of antibiotics to clear the overwhelming infections in her bladder and skin, based on cultures of the skin and urine.
Within a week, Myra started to look and feel better. She was sad and seemed to be traumatized by being re-homed. But with a lot of love and TLC, she started coming out of the crate and interacting with other dogs in the house. She did not bark for the first 3 months in foster care.
I am happy to say, Myra is now an active, energetic, playful, wonderful dog. She grows hair faster than any dog in the house and never has urinary accidents. If only her original owners could have realized how easy it could be to solve her problems. Bad pet food is responsible for many pets being re-homed, euthanized, or abandoned because owners think allergic diseases are too hard to deal with.
If you have an allergic pet, don't give up hope. But DO find the right diet. 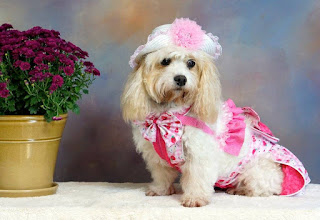